This page describes content that may be included in a future update for Java Edition.
This content has appeared in 1.17 development versions, but the full update containing it has not been released yet.

It has been suggested that this page be moved to Geode.
If this move affects many pages or may potentially be controversial, do not move the page until a consensus is reached. [discuss]
Reason: just plainly called "Geode" as a configured feature - see also the reasoning on mossy cobblestone boulder
When moving, be sure to use the appropriate tool instead of simply copying and pasting the page's contents, to preserve edit history.
Amethyst Geode 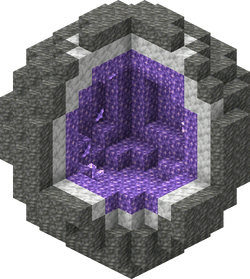 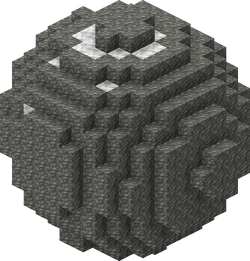 Amethyst geodes are underground structures found in Overworld biomes which contain smooth basalt and serve as the only source of calcite and amethyst items and blocks.

Amethyst geodes generate commonly between Y=70 and the bedrock layer regardless of whether "generate structures" is toggled on or off and can replace bedrock. They only override caverns, mineshafts and sometimes are exposed on the surface, such as on beaches and underwater in oceans.

The inside of a cracked amethyst geode (With tuff instead of smooth basalt).

Amethyst geodes consist of three layers: an outer layer of smooth basalt, a middle layer of calcite and a hollow layer of amethyst blocks with budding amethyst blocks sometimes generating throughout. Amethyst crystals generate within the structure on budding amethyst. Geodes have a 95% chance of generating with a crack, exposing its inside. Caves, aquifers and canyons cannot cut into geodes,[1] and as such are often obstructed by them, except in cases where the crack intersects a cavern.

Issues relating to "Amethyst Geode" are maintained on the bug tracker. Report issues there.