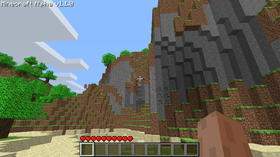 Alpha v1.1.0 was reuploaded on September 13, 2010,[verify] to fix a bug where the player could force the camera's movement inside walls. The version found in the launcher is the pre-reupload version, but is recompiled differently and has a different checksum.