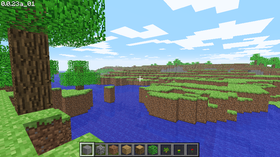 To celebrate 10 years of Minecraft, a JavaScript remake of this version was uploaded to the Minecraft website, and made it possible to play multiplayer with up to 9 others through the browser. This version can be played at classic.minecraft.net.[6]